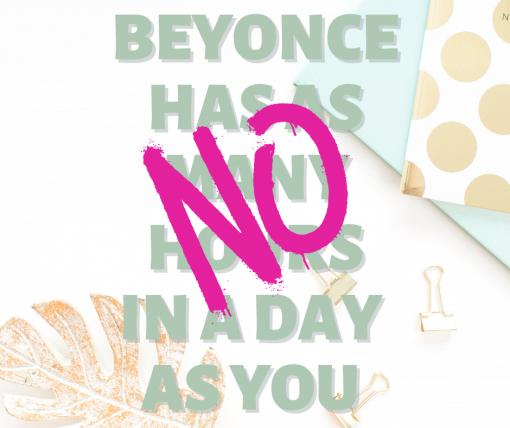 No, you don’t have to DO more.

You may have heard the bullsh*tastic quote, “Beyonce has just as many hours in a day as you.”

If not, you’re welcome. (where’vyabeen?)

It’s meant to motivate people to use their time wisely and intentionally. But, I’m going to blow this quote up.

Here’s why this quote is BS.

She has people for that, which opens up hours and hours in her day you and I would be spending running around like fools.

So, no, you and Beyonce do NOT have the same amount of hours in a day.

What can we glean from this quote then?

But, what we CAN glean from this quote (if we look real hard) is this: time IS a form of currency.

All of us, from us commoners to Queen Bey, start off with the same amount of hours in a day.

It IS (kinda) an even playing field. And the way to hack time is to either be rich as f*ck, or….wait for it…..be militant about choosing your thoughts.

How often do you wake up, start getting ready and the next thing you know you’re at work. Then, two hours have passed. Then, it’s Wednesday. Especially if your job is repetitive. It’s almost like you’ve been on auto-pilot for three days.

Newsflash: Your thoughts are likely set to auto-pilot too.

If you’re not really paying attention, that low-level hum of sh*tty, limiting thoughts can become the unchosen soundtrack of your life.

Heck, it could be there right now.

“I’m not good enough for that job.”

“I’m not skinny enough to wear that.”

“I’m not smart enough to go after that promotion.”

“How am I going to get there from here?”

Start listening to your thoughts. Because any minute you allow low vibrational thoughts to marinate in your mind, you are shrinking the size of your potential. Don’t worry about getting turned down for that promotion, because YOU’RE already passing yourself over for it.

It’s happened to me.

There was a time when I didn’t realize my thoughts were directly leading me in the opposite direction of my career goal. And I was stuck.

A miracle showed up to unstick me. Her name was Patricia Moreno.

A gorgeous, bright light of a woman with thick, long, black hair that’d make anyone jealous, Patricia could put anyone at ease with her infectious smile.

Patricia was the trailblazing founder of “spiritual fitness” way before anyone hopped on a spin bike and started yelling affirmations.

Patricia had a vision and mission to help people cultivate strength in their bodies and minds. She launched a class called Intensati in Equinox gyms across NYC.

With mantras like, “I am strong,” and “Every day, in a very true way, I co-create my reality,” it was waaaay ahead of its time, but it was right on time for me.

Patricia told us the average person has up to 60,000 thoughts a day and the overwhelming majority of them (80%) are negative and repeated.

She wanted to make us aware, then help us consider replacing them with empowering ones.

I examined my own thoughts. Since childhood, I could never be smart, pretty, skinny, or successful enough. Upon further reflection, I realized these ideas were rooted in events from my childhood.

Later, when I dropped out of high school and took a job in a grocery store, I added “not good enough” to the ever-growing list of limiting thoughts and beliefs.

I eventually got my GED, put myself through college, and entered the workforce.

But, those original thoughts unwittingly became the soundtrack of my life, playing on default in my mind over and over again.

Here’s where I changed it.

One December, I received an email from Patricia about setting New Year’s resolutions. She asked me to look back at the previous year.

I once again lamented that I did NOT get my dream job as a TV reporter in NYC.

I had certainly been trying. At the time I was working as a TV reporter for a station in Connecticut. I was about 6 years into my career. I had dreamed of working in NYC, telling stories about the place that inspired me so much. Year after year, I tried to get there, and just couldn’t. I networked and reached out to stations, but nothing.

Then I read the next line of Patricia’s email, “What role did YOU play in not getting to your goal?”

Sometimes something hits you and you’ll never forget it.

This one hit me like a ton of bricks.

I answered in my head in my usual defensive posture – what did I do?

I kept a carefully updated spreadsheet of every call and email I made.

I updated my TV reel and resume.

Then it hit me:

The one thing I didn’t do was believe I could get the job.

My mind rewound the last year. When I got an email back from a potential manager or landed an informational interview, I acted like THAT was the prize.

I never truly believed the job I so desperately wanted would be offered to someone like me.

Trust me, limiting beliefs will zap you of your valuable, never-gonna-get-it-back time.

They will keep you small, and your goals just out of reach.

Once I realized I was in my own way, I changed my thoughts – as uncomfortable as that was. I shined a light on that list of limiting beliefs and once I did, I considered that maybe, just maybe, I didn’t have to believe them. That I could choose new ones. Even if it was tough to put them down at first.

I started visualizing that I could have that job.

I started spending time each day visualizing what I would wear, how I would walk out my apartment door, down the stairs, and down the block towards the subway. I started showing up to my Connecticut job like I already worked in NYC. I asked for interviews with NYC stations while believing that I would make a great hire.

In 5 months, I was working at a station in NYC. 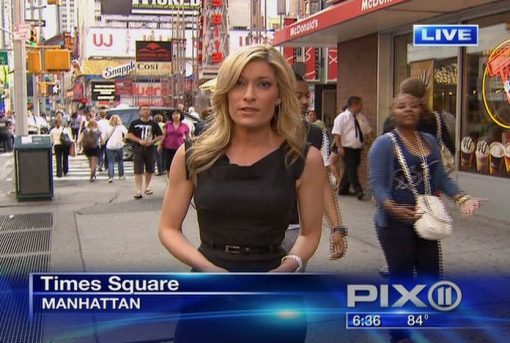 When I moved to Washington, D.C. for a job with a CBS affiliate years later, I missed Patricia’s classes dearly. But her teachings set off a thirst for learning about spirituality and how our thoughts play a role in our outcomes. I started reading books and searching for ways to strengthen my practice.

When the pandemic hit, Patricia took her classes to Zoom and gave us a place to share.

Patricia came through for me (and so many others) again.

She was a bright spot in a dark time for many. When George Floyd’s death sparked widespread racial injustice marches, we needed her even more. She showed up religiously every Saturday and shared her wisdom.

The crowd grew. Hundreds from all over the country and the world reconnected. It is not an overstatement to say she healed us all to some degree during that time.

I would go through lots of soul searching, therapy and healing during this time. By now, I had moved on to work at CBS News – a goal I could never have imagined reaching back when Patricia’s email about New Year’s resolutions reached my inbox.

I get to tell stories from the White House and the U.S. Capitol to a nation of people. From an impeachment to an election to an insurrection, I communicated clearly and with compassion. And I know my feature stories of a police department leading with mental health first, and a Capitol Police officer saved from suicide gave people hope.

I would’ve never been able to do all that if it wasn’t for Patricia.

I always thought the TV journalists who work in NYC or at a network were smarter or more educated or just plain “better” – when really, the truth is we are all the same. The one thing they may have that some don’t is either they were told empowering thoughts from a young age or they decided to feed themselves those thoughts.

So, what kind of thoughts are YOU feeding to yourself?

And how much time are you wasting on thoughts that don’t serve you?

Miles Davis once said, “Time isn’t the main thing. It’s the only thing.”

Because of Patricia*, you and I are more like Beyonce than we ever knew.

*To honor Patricia’s legacy, you can make a donation here