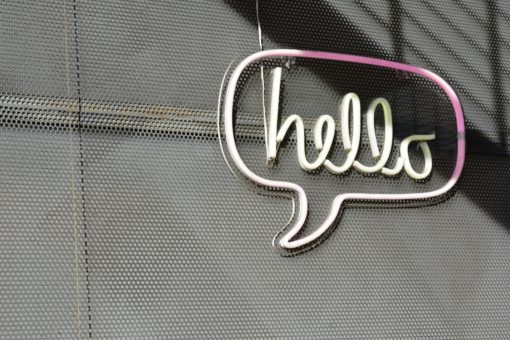 Oh $#!@, here comes Andrea/Tisha/Jose/Courtney/Mike (insert name of negative coworker here)!” This was a thought I had anywhere from about one to 342 times a day at my last two stations apiece.

They sidle up to you with, “Did you hear, Jess and Mike have been DATING, even though she’s not even divorced yet.” or maybe it’s “I just heard Brandy is applying for a job in Philly. Omg, with her voice, she’s NEVER going to get a job there, what is she THINKING?” or maybe it’s “Bob is such an a$$hole, he just said blah blah blah to me. How the hell did he even GET his job?’

You didn’t invite him or her. No. This was what we call a “drive-by gossiping.” They show up like an uninvited party guest with a crappy fruitcake they demand you serve, only there’s no stomachache-inducing dessert, only soul-crushing negative vibes – and no amount of Tums can cure that. And, you’re left with a dilemma. What do I say now?

Ok, it may sound like I’m overreacting. And yes, I may be a little dramatic, but hear me out. Actually, forget about me, hear Oprah out.

Ms. O famously said, “Gossip is an assassination attempt by a coward.”

See, Oprah knows that your every word, your every second, your every action is supremely important. And any time you spend trafficking in talking about some stuff you know nothing about is time taken away from offering a kind word to another, taking an action to further your career, or thinking a thought that could generate the next “big thing.” Think small, be small. Oprah knows, just like I do, that one small thing can change the world, and no one is changing the world with $hit-talk about Brandy. Gossip is full of nasty, low-level energy and frankly, girl, it’s beneath you.

Every time you speak, you have an opportunity. An opportunity to lift others up, or play small. Don’t throw away your shot. The world needs what you and only you have, and do you know how we get a more supportive, uplifting work environment? By setting the example and being the change. So, the next time gossipy Garrett comes up to you, and wants to traffic in tales, shut him down. Try ‘hmmm, that doesn’t sound right,’ or ‘oh that’s too bad,’ or ‘I’m on a gossip-free diet right now’ and then change the subject. It’s called a re-direct. Dog trainers do it with dogs when they are trying to change their behavior. Dog barking at a bus? Command him to sit and then give him a treat. You can do that with Garrett too.

But, wait. What if YOU are the one Garrett’s gossiping or $hit-talking about? You know that underhanded compliment that’s not-so-much-of-a-compliment? I had a new coworker once who said to me at our first meeting, “My husband and I were watching you the other night, and he said ‘I like her she’s not annoying.’” I was taken aback and uttered, “Annoying?’ She responded, “Yeah, you know how some reporters are annoying? He said you weren’t like that.” This is a grown woman. She should know better. And she probably did, but said it anyway.

What others say about you is more of a reflection of them than it is of us. That coworker said what she said because of her insecurity, poor manners, lack of social skills, need for authority, you name it. I honestly don’t know. But, I do know this, it had nothing to do with me.

Ever read the book, “The Four Agreements,” by Don Miguel Ruiz? I read it not long after this interaction. It’s brilliant. Changed my life. One of the agreements is, “Don’t Take Anything Personally.”

“Nothing other people do is because of you. It is because of themselves. All people live in their own dream, in their own mind; they are in a completely different world from the one we live in. When we take something personally, we make the assumption that they know what is in our world, and we try to impose our world on their world.

Even when a situation seems so personal, even if others insult you directly, it has nothing to do with you. What they say, what they do, and the opinions they give are according to the agreements they have in their own minds…Taking things personally makes you easy prey for these predators, the black magicians. They can hook you easily with one little opinion and feed you whatever poison they want, and because you take it personally, you eat it up….”

I will admit it’s really tough sometimes to blow off what others say about us. But adhering to this agreement can eliminate suffering. When others talk about us, it only hurts if we believe what they say is true. If I was sensitive because I really did think I was annoying, yeah, then it could hurt. But, that whole interaction was truly in my coworkers world, wrapped up in all her own agreements. She had never met me before, so she knew next to nothing about me. So, how could it be personal? When you break it down like that, it can truly free you.

Carole Stizza, a Virginia-based business and life coach says it’s all just a power play. “We have a tendency to put more weight into what we think someone else might know when they throw us a curve ball, and I caution people don’t assume they know something you don’t, I would actually caution you to assume you know more than they know.”

I highly recommend reading “The Four Agreements.” It’s a quick, easy read. Another agreement is, “Be Impeccable With Your Word.” That ties right into putting the shutdown on gossip. When Garrett wants to talk about how he heard Jess and Mike are dating, be impeccable with your word. People who are true to their word don’t lie, or deal in falsehoods, so unless you saw Jess and Mike making out, you can’t talk about it – and hey, even if you did, you’ve got bigger and better things to do with your super-valuable words and time. Having agreements like these guiding your life can help ensure your rise to the top, your boss-lady future, your Oprah-esque ascendance.

As a woman on-air, you already know that your words are your currency, and your energy is important. You are responsible for not only the energy you bring into the room, but the energy you leave that room with. So, be the light to gossipy Garrett and the rest. Be that leader, and watch them follow.